Home » Day 5: Photographs of My Grandfather » Memories of my grandfather
× Share this Article

Memories of my grandfather 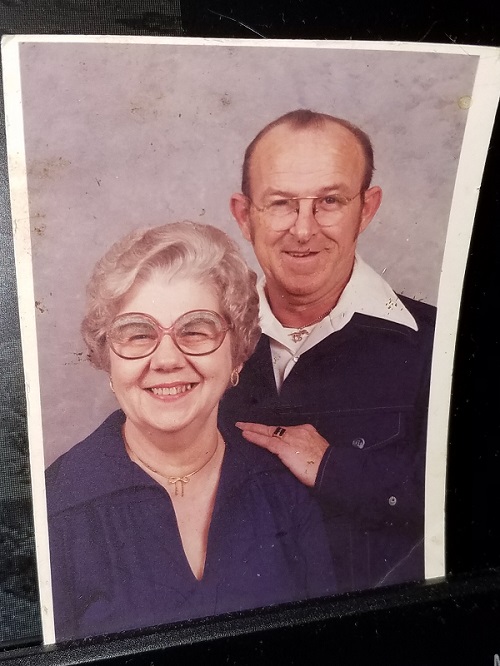 Life is a rolling reel. It has past, present and future. Life ebbs and flows in constant motion. Our memory is a series of photographs, moments frozen in time for us to remember, recall, relive. Some life photographs sneak up on us and resurface even when we don't want them to, and we put those back in the album – which is our memory – rather than holding them and reliving them. Some photographs from our life are beautiful, and we call on them when we want to remember. Our memory organizes our series of still shots of life into a nice, neat album with chronological order. Life with dementia is a life full of moments, still photographs, no continuity or running reel. Life becomes one still shot at a time, jumbled in a box rather than an organized album. We wake in the morning not knowing what snapshot in time we will be looking at. The photographs can switch quickly from one moment to the next. Some are beautiful, some are scary, some we wish we could bury and never look at again. These are a couple of my photographs from my grandfather's battle with dementia.

A beautiful photograph I look at often. I was 15-years-old, and I was wrapping Christmas presents for my grandmother. In so many ways, it was just like years before – a long table set up in her bedroom in the big, yellow, turn-of-the-century home, with gifts everywhere. Just as in years past, my grandparents had overdone it, with all of the items my siblings and cousins had circled in the Sears Christmas Catalog spread out before me. I was Gram's elf this year as I had been every Christmas since I could first wrap a present. Although so much looked and felt the same, this year was different. This year would be our final Christmas in this home, and the last Christmas we shared with my grandfather...or what we had left of him. We had been watching him fight a fast and furious battle with Frontal Lobe Dementia, a battle none of us ever saw coming; a battle he would lose.

My gift wrapping was interrupted by a tug on my sleeve. I turned and there he was – the man who was once the toughest, grittiest man I had ever met. To me, before the battle, my grandpa was straight out of the Westerns he watched. I recall his hard, stained hands smelling of Marlboros and varnish, a smell I loved so much as a young girl. Now as I turned to him I saw a boy. "What is it, Grandpa?" I asked, knowing there would be no words to answer. Dementia had stolen his words long ago, as his ability to communicate verbally was the first loss we could not ignore or explain away. Communicating with him now required reading body language, listening to his grunts and groans, guessing from his eyes and his mannerisms what he wanted, needed, yearned for. He beckoned with his eyes for me to follow, and I did.

My grandfather led me down the stairs to the first floor, through the living and dining room, away from my task upstairs. I remember him checking back every few steps to be sure I was still following. We arrived at the kitchen where he motioned toward the microwave. I saw that he was midway through a disaster in the making. He had a Mama Celeste Pizza, still wrapped in plastic, in the microwave with the door open. I thought to myself that he must have been hungry and decided to make himself a pizza. I smiled and started my work of completing this task he had gotten lost in. I talked him through the steps, a practice I had gotten used to with him and did now out of habit. Every step I took he walked by my side, watching me with that boyish grin, mouth agape, an expression that brings tears to my eyes remembering it today.

When I had completed the pizza, I placed it on a plate and started taking him over to the table, but he stopped me and took it from my hands. He urged me through head nods and nudges to the dining room table. In one heart-wrenching moment, as a lump developed in my throat and my eyes welled with tears, I realized the pizza was not for him. He was making this pizza for me. This shell of a man who could no longer tie his shoes for himself or find his way home from the mailbox had the thought that his granddaughter was hungry and needed supper. My grandfather, the provider, had provided for what was probably the last time.

I took my seat at his table, the seat to his left that I had sat in since I was a child, and he placed the pizza in front of me. He took his seat next to me at the head of the table. I sat at that table forcing down Celeste Pizza and tears, as he watched me with an expression that I will never forget. The look of love and pride on his face is the same that I now see on my son's face when he hands me a Crayola drawing that he poured all of his heart and soul into. That day, despite his dementia, my grandfather gave me the greatest gift I received that Christmas, and as I ate that pizza, I gave it right back. In the battle that was Dicky Damon vs. Frontal Lobe Dementia, my grandfather Dicky took that round, and I was there in his corner. This photograph of my grandfather making me a pizza is a photograph I pull out often.

The painful photographs from our battle I try not to look at. They sneak up on me from time to time. I have buried the photograph of my grandfather crying through that final Christmas just a couple days later, his dementia having taken his ability to experience "appropriate" emotions and express himself in the ways he wanted to. I fight the memory of that morning with all of us sitting around him trying to carry on as if nothing was wrong, trying to block out the grown man's sobs while we opened presents and feigned joy. The whispers from the children of "What's wrong with Grandpa?" I have also buried the photograph of my grandfather sitting in his chair the Saturday before the Super Bowl, insisting that the game was coming on and we were all going to miss it.

What did it feel like for him as he sat there alone and the game never came on? Would it have felt differently if I had sat there beside him, in his corner? Instead we sided with dementia and argued with him, and told him he was wrong, and talked among ourselves about how silly it was for him to forget that the Super Bowl was always on a Sunday. And I certainly do not look at the photograph of him in the nursing home, his bags packed and in his hand, tears streaming down his face as he begged without words to be brought home to the big yellow house. I only saw that photograph once, something I regret to this day.

If I could speak to every family member of every person in a battle with dementia, I would tell them that every day is a photograph. I would tell them when you have a bad day or moment, dive into the tough time with your loved one so that they do not have to be there alone. Tomorrow you might make a new memory, and it might just be the most wonderful one yet. When you are lucky enough to pull out a photograph like the one of my grandfather and the Celeste Pizza, savor it, because it may just be the most beautiful moment you will ever share with that person, and it will only last a moment. One thing is for sure – with dementia, there is no rewind, there is no pause, and there is no fast forward. For better or for worse, with dementia there is only the here and now. Live in the moment, one snapshot at a time, so that when you look back at the album of photographs from the battle with dementia, your loved one was never in it alone.